So you want to be a Makeup FX artist? Pt 1. Where Do I Start?

So, you have been doing what you are doing for a while, life was going ok, good, not great, and you have slowly come to the realisation that you have a niggling dream to work in Special Makeup FX…. Or perhaps you always knew you wanted to try for this, but you never quite knew how to start? You might be twenty and single, footloose and fancy free, or you might be married with a mortgage and kids….
I do empathize with you- I didn’t get into this until I was 40, and let me tell you it took me about three years to work up the guts to do it!! I flipped everybodies lives upside down in the process, because I had to move to the other side of the country for three months to train, and previously I had been home with my kids while they were little, so my husband suddenly had to rediscover (discover?) his domestic side and hold the fort whenever I was working! Fortunately for me though he realized I needed to do this and saw how much happier I was once I had so it all worked out, not everyone is that lucky. Also we have money from our other business so I can afford to just do the jobs I want- never had to take weddings to pay the bills.
So where do you start?

Well, there are plenty of great articles and blog posts on that- here’s one for starters:

http://www.stanwinstonstudio.com/home.html Go to the FAQ.
and another:
http://www.creature-effects.com/section149812.html
and another
http://www.learnmakeupeffects.com/what-is-the-best-way-to-learn-makeup-effects/
If you do decide to do formal training, it isn’t just about the sculpting and moulding and makeup- one of the most poorly taught areas is Industry Protocol. This is what a good course should include or at least touch on. Unfortunately very few actually do-
The Business of Film Makeup:
Because there is totally inadequate education in these areas, I am actually in the process of developing a book on this and related areas. I have taught a few short courses on the basics and frankly I was horrified at the lack of basic general film knowledge out there when these schools toss people out into the real world- and not just in the Makeup Dept but from people with three year film or media degrees…….
Even when people teach themselves without the benefit of formal training, as have many of the top people in the industry today, you are only as good as the information you get and the people who inspire you- who are your influences, and how good are they? If you can’t name five of the worlds current most influential makeup fx artists, and five of the pasts best, then ask yourself seriously if you really know what you are doing trying to get into this business…. Film is not a glamourous job, except maybe for five minutes once every couple of years, it is hard graft and dedication. 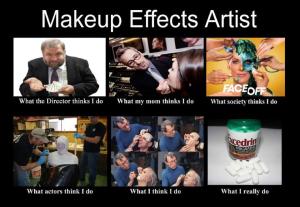 Continued in So You Want To Be A Makeup FX Artist Pt 2: Breaking out and Breaking in…..

This entry was posted on Tuesday, July 24th, 2012 at 11:26 am and tagged with Arts and Entertainment, effects, film makeup, learn makeup, learn sfx makeup, make-up artist, Make-up FX, Makeup, makeup and hair, Makeup Effects, Makeup FX, movie makeup, sfx, special effects, special fx and posted in Life, the universe and everything..., THE BUSINESS OF MAKEUP FX. You can follow any responses to this entry through the RSS 2.0 feed.
« How Time Flies… The Intensity of Creativity….
The Power of No…… »

Brandon Robshaw and the English Language

A liberal pedant's view of the state of the language

A US academic goes to Russia

The Logic of Science
Everyday Asperger's

Life through the eyes of a female with Aspergers

Bits of it were dullish grey, bits of it dullish brown, the rest of it rather less interesting to look at.